And it came to pass at the seventh time, that he said, Behold, there ariseth a little cloud out of the sea, like a man’s hand. And he said, Go up, say unto Ahab, Prepare thy chariot, and get thee down that the rain stop thee not. 1 Kings 18:44

Elijah prophesied a drought and then was directed to hide in the Kerith Ravine, where he was fed by the ravines. Later on he is asked to present himself to King Ahab and God would send rain on the land. Elijah summons all the prophets of Baal to the Mount Carmel and challenged them to call upon Baal to prove whether he was the true living God. Nothing happens upon calling Baal to burn the sacrifice but fire comes when Elijah calls upon the name of the true God burning up the sacrifice on the altar and even licked up the water in the trench. When the people saw this, they fell prostrate and cried “The Lord – He is God.” Elijah kills all the prophets of Baal and once again proves to evil Ahab that the Lord was God and He was the only true One. It is after this event that Elijah tells his servant to go and look toward the sea; he goes seven times and the seventh time he goes he sees ‘a small cloud rising as a man’s hand.’ The sky grew black with clouds, the wind rose; a heavy rain came, as the Lord had told Elijah. 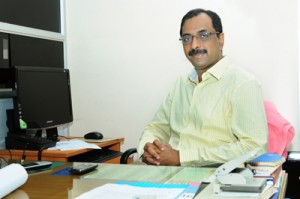 Elijah’s faith in his true living God led him to obey God’s command. This relationship with God changed his understanding of situations, in which he was able to think and act for the Lord. Living by faith is a great challenge and when we study and observe great men of God, we can see that their thinking and perception about the world was very different. The 1st century Christians, ‘thought differently and acted like wise’. When the human tendency is always to ignore the insignificant, ‘Jesus chose the insignificant’ to accomplish His will.

As I was collecting and consolidating the annual report of the ministry from different regions to present at the state AGM, the above verse came to my mind. The small growths here and there in our fields show that our God is going to bring a great revival in the State of Kerala. The institutions where we have ministry have grown from 64 to 74. Mobilisation of prayer has improved significantly. Where ever prayer has improved the ministry has also been improved.

This AGM we were able to give provisional affiliation to the Tamil ICEU in Trivandrum. A group of believing Tamil speaking students took the initiative to join us in 2004. The students in the cell took efforts to start ministry at different colleges and hostels. It has grown significantly and has one ICEU meeting at Palayam and 4 student cells in different colleges and also 5 groups meeting at different areas in Trivandrum.

The AGM also decided to sanction the proposal to buy (31 cent) land and a house which belong to a Trust (ACCES) led by Bro John Varghese (Rajuchayan, Evangel Press) our graduate for 10 lakhs (the actual market price would be more than 65 lakhs) and including registration fees, maintenance of the building we have fixed the budget for Rs. 18 lakhs. We plan to develop this as a student centre for the ministry in Malabar. I request a special attention and prayer in this regard.

Kindly pray for the preparations of the next Kerala EGF conference at Kottayam from 12th to 14th April. KEGF committee along with the local EGF committee will utilize their efforts to organise the conference.