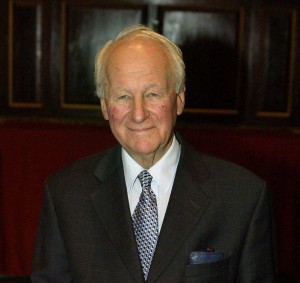 Rev.Dr.John R. W. Stott, former Rector of All Souls Church, London and one of themost significant evangelicalleaders of the 20th century, died on 27th July 2011, aged 90. His leadership of the evangelical movement helped move it from a rather narrow-minded fundamentalism after the Second World War, to the fastest growing section of global Christianity it is today. Time magazine ranked him along with Nelson Mandela and Bill Gates in the list of 100 most influential people of the world in 2005. Billy Graham once described him as the “most respected clergyman in the world today”. Alongside Billy Graham, John Stott was a significant player in the Lausanne Movement which promotes worldwide Christian evangelism and remained its Honorary Chairman till his death. He largely crafted its two major documents, The Lausanne Covenant (1974) and the Manila Manifesto (1989). Classically evangelical, Stott emphasized the need for personal conversion, the authority of Scripture and the centrality of Jesus’ death for sinners. But he also emphasized the need for the Christian mind and stood against anti-intellectualism. Though a life-long evangelist, he refused to limit Christian engagement with the world to evangelism alone. He was passionately committed to the moral and social dimensions of the biblical gospel, including justice for the poor and the care of creation.Student ministry was dear to his heart. He saw the strategic nature of the Christian ministry in the University. While studying in Trinity College, Cambridge he was active in Cambridge Inter Collegiate Christian Union and later served as the Vice President of IFES for many years. He has spoken in some of the major UESI conferences. His messages and books have been instrumental in challenging a large number of students and graduates to serious Bible study and holistic understanding of the gospel. His book, “Truth about Jesus” has been translated and published in Tamil by UESI. Another significant book from him, “Issues facing Christians Today” was released in the Missions Conference of UESI-Kerala held at Mavelikkara in 1987, where he was the main speaker. Perhaps more than any other person in the last century, John Stott restored confidence in the authority of God’s Word and the centrality of biblical preaching and teaching. He inspired evangelicals around the world to make a robust and clear affirmation of the biblical truth, while emphasizing that it must be backed up with a godly Christian life.